When the 7th Legislature of Texas passed the Act creating the county that we now call “Stephens” they also enacted that the “County Seat” should be called “Breckenridge”. Our county was named “Buchanan” in honor of James Buchanan, then President of the United States, and the county seat named in honor of the Vice-President John Cabell Breckinridge (spelled with an i). During the Civil War the county was renamed “Stephens” in honor of Alexander H. Stephens, Vice-President of the Confederacy. After the war, when the citizens of Stephens County established their county seat they chose to retain the name of Breckenridge. In those days most of the settlers were of Southern decent and among southerners the name “Breckinridge” was held in high esteem. Later generations have forgotten this man whose career was filled with such adventures that he can be classed as one of the most colorful men ever to hold the Vice Presidency.

Breckinridge was elected Vice President in 1856. His election came at a time when the country was deeply divided over the question of the western expansion of slavery. That year a divisive democratic party nominated James Buchanan. He had served abroad as Ambassador to England during the administration of Franklin Pierce and was nominated over incumbent Pierce. For the Vice President, the Democrats nominated Breckinridge in an effort to compromise the strong feeling between the Southern Democrats and the Northern Democrats.

Breckinridge was only 35 years of age, but had a reputation for competence among all factions in Washington. He began his career in the Kentucky State House of Representatives at age 28. He gained power by earning the open admiration of Henry Clay who headed the Whig Party in Kentucky. In 1851, Whigs joined with Democrats in electing Breckinridge to congress. Five years later he headed the Kentucky delegation to the Democratic convention and was nominated.

Breckinridge’s Vice Presidential term was either more or less spectacular than many others of the Nineteenth Century. However, events that followed his term in office gave him a unique place in history. The nation was headed toward secession. Breckinridge hoped that the Union would be preserved but he did nothing to prevent the break-up of the Union because he considered that secession was a constitutional right of a state. In 1860 Breckinridge was nominated as the Presidential candidate of the Southern Wing of the Democratic Party. The Democratic Party in the North nominated Senator Stephen Douglas of Illinois. The Republicans, of course, ran Abraham Lincoln. A 4th party organized, and this combined with the calamitous split among the Democrats caused a minority victory for Abraham Lincoln.

In March 1861, Breckinridge began serving as United States Senator from Kentucky. The Civil War opened a few weeks later. Kentucky did not secede as Breckinridge had expected. He used his place in the Senate to openly condemn Abraham Lincoln and to defend the principal of separation. In September, the Union Army won control of Kentucky. Breckinridge fled to the Confederacy. The Federal Government indicted him for treason, since he had gone over to the rebel side from a state that had not seceded. Breckinridge gained for himself the unhappy distinction of joining the infamous Arron Burr as a Vice President charged with treason.

Breckinridge fought in the Southern Army rising to the rank of Major General. In February of 1865, Jefferson Davis named Breckinridge his Secretary of War. When the war ended Breckinridge and others made a desperate attempt to escape capture by the Federal troops. Of the Confederate leaders he was most vulnerable to arrest because he was under indictment as a traitor. For two months he eluded government forces in the wilderness of Southeast Georgia. Gradually he made his way down to Florida and was able to cross the ocean to Cuba. For nearly four years he wandered through England to Canada and back to England and across Europe and the Middle East. During this time, English admirers and prosperous Southern expatriates supported him. On Christmas of 1868, President Andrew Johnson issued a general amnesty proclamation and Breckinridge’s exile ended. He returned to Kentucky in 1869 and was met by cheering crowds. He died May 17, 1875 in Lexington at the age of 54. He had gained wide respect among his contemporaries. One eulogist stated “Kentucky could but morn her lost and teach her sons to imitate his virtues.” It was not until January of 1958 that a Kentucky Circuit Court Judge dismissed an 1852 indictment for treason and conspiracy against John Cabell Breckinridge. At last the City of Breckenridge (the spelling was then changed to an e) had an honored namesake.

Characteristic of Breckenridge and Stephens County is the ever plentiful mesquite tree. Even though many dollars have been spent toward its eradication, this drought resistant tree has almost flourished and is still very abundant. This tree is another of the vital portions of the heritage of Breckenridge.

Oil illustrates another major part of the history and development of Breckenridge. The tremendous oil boom in 1917 at Ranger in Eastland County attracted attention to the area including Stephens County. The discovery of such vast wealth so near excited everyone that cowboys, teachers, doctors, lawyers, and nearly everyone else quit their jobs and joined the new search for “black gold”. Finally oil was struck west and north of Breckenridge and Stephens County then entered a new era. Since that time, the oil industry has contributed greatly to the prosperity and growth of Breckenridge. We are a city with a proud heritage and a hope for a better tomorrow. 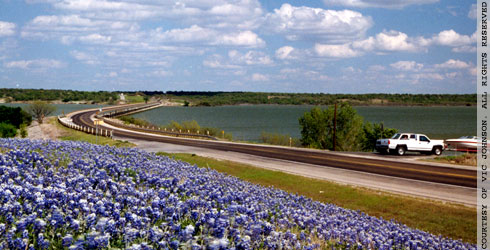